On March 28th, Chadron Middle School hosted its first scholastic day competition in at least 20 years!  The idea to host a competition at CMS originated last year when several of the coaches mentioned how great it would be to host the event.  This year's competition coincided with a district-wide teacher in-service,  so regular classes were not interrupted and the middle school faculty, as well as faculty from other schools in the district, could help run the event.

Overall, the event was a great experience and we hope that all of the students, coaches and spectators had fun and felt welcomed at our school.  We also hope that all of the schools that participated will join us again next year for what we hope will become an annual event.
Posted by Mr. Dressel at 7:36 AM No comments:

Over the past two weeks, Chadron Middle School students have showcased their musical talents.  On Friday, March 16th, the Chadron Cardinal Mini Singers performed their rendition of Adell's Rolling in the Deep.  The performance was part of a fund-raising effort to help send the High School's Cardinal Singers to Kearny to perform at the Nebraska Rural Education Conference.  Other middle school performers included Brooklyn Stack, who performed a song and dance routine that she will use at the Stars of Tomorrow competition and Mikki Hastings who performed Think of Me from the The Phantom of the Opera.


On Thursday, March 22nd Mr. Rischling's 6th through 12th grade band classes held their annual spring instrumental music concert at Memorial Hall on the Chadron State College campus.  The concert was well attended and included musical numbers from the 6th grade band and the 7th/8th grade band.  All of the students did an excellent job!  The 6th grade Band really got the crowed going with their performance of the Chadron Fight Song and the video clip is from the 7th and 8th grade band's opening number.

Congratulations to all of the students on their excellent performances.  We would also like to thank Chadron State College and Dr. Lambert for allowing our students to perform at the college.
Posted by Mr. Dressel at 8:17 AM No comments:

7th and 8th grade students from Chadron Middle School participated in the Chadron State College Science Fair on March 17th.  Students were required to complete a project for their science class and were allowed to choose it they wanted to enter their project into the science fair.  In total, 20 students from CMS submitted project into the science fair  and 5 students qualified for the State competition.  Congratulations to Shoilee Rhaman and Jayden Garrett for placing 1st and 2nd place and to Walt Mays, Allie Johnson, and Kaylee Garvin for qualifying for State!


After weeks of hard work and preparation, the Chadron Middle School Scholastic Team invaded Banner County on Friday, March 16th for the their first scholastic competition of the season.  Both CMS teams had outstanding performances.  The 7th grade team took home the gold with a first place finish and our 8th grade team finished a close second behind a strong Sidney team.

Congratulations to both teams on a job well done and we look forward to seeing you all in action at our home scholastic competition on March 28th!

Below is the Spring Testing Schedule for CMS.  As you can see, we have a very busy testing schedule planned and it is important that our students are in school so that they do not have to miss regular instructional time to make up exams.

Thank you, and if you have any questions, please let me know.

First, The Chadron Public School District would like to thank everyone for participating and for voting in the recent bond process and election.  A very special note of appreciation is extended to Cheryl Feist and the County Clerk’s office for their extra time and patience to make this as smooth a process as possible.  Our patrons were given the opportunity to make this decision.  The people decided.  The BOE and administration will now act and move forward on the people’s wishes.

An article entitled “A History of the Chadron Public Schools” said it well when it stated, “What has made the Chadron City [Public] Schools a leader among the public schools of northwest Nebraska? ….I believe it is all of these: the very spirit of cooperation so prevalent and the keen desire that our children shall have the best that the good life can offer.  All this has gone into the building of the institution know as the Chadron City [Public] Schools.”

In this same spirit of cooperation we will move forward TOGETHER acting on the desire of the public and continuing to offer the best educational opportunities for the children of the Chadron Public School District.

Please join with Board and the Administrative Team on March 26 at 5:30 PM in the Central Office Board Room for our next steps in Strategic Planning.
Posted by Mr. Dressel at 7:20 PM No comments: 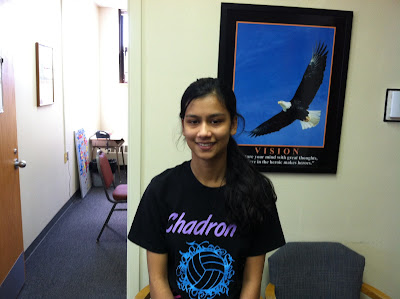 This year, Shoilee Rhaman, an 8th grade student from Chadron Middle School, represented Dawes County.  Shoilee made it to the final round of 10 and ended up taking 6th place!

Congratulations to Shoilee on her outstanding achievement.
Posted by Mr. Dressel at 8:13 AM No comments: 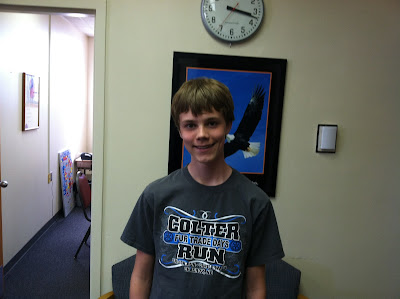 Eric Lambert, an 8th grade student at Chadron Middle School, took first place in the American Scholastic Achievement League's online scholastic contest.  This was an international contest and students were tested in the four academic cores of math, science, social studies, and English.

Congratulations Eric and best of luck to the entire CMS Scholastic Team as the begin their season at Banner County on March 16th.
Posted by Mr. Dressel at 8:12 AM No comments:

End of 3rd Quarter
The end of the 3rd quarter is on March 7th.  All student work must be turned in at the end of the school day to receive credit.  We will also have our end of 3rd quarter awards assembly at 3:00 p.m. in the MS gym on March 7th.  Students will be dismissed from class at 2:55 p.m. and we will hand out perfect attendance awards and Cardinal Effort Awards.  Students will be dismissed from the gym at the end of the assembly.
Lock Down Drill
Chadron Middle School will run a lock down drill on March 13th at 9:30 a.m.  Please do not pick up students during this time as no one will be allowed to leave and enter the building.

Read Across America Day/Dr. Seuss B-Day
On March 2nd, students from Miss Dobry’s and Mrs. Waugh’s 2nd period reading classes read Dr. Seuss classics to children at the Child Development Center, Chadron Primary School, and 4th graders at Chadron Intermediate School.  This was a great opportunity for our middle school students to be positive role models to the younger kids in the community and it was a lot of fun.  Check out pictures at Mr. Dressel’s blog page: http://mrdressel.blogspot.com.

National History Day State Qualifiers:
On February 24th, thirteen 7th and 8th grade CMS students had their NHD projects qualify for the State competition, which will be held in Lincoln, NE on April 21st.  Pictures of some of the projects and links to the websites that qualified for State are posted on Mr. Dressel’s blog page: http://mrdressel.blogspot.com.

Get Texts from the Principal
Remind 101 is free online software that allows Mr. Dressel to send school related information to parents via text message.  If you are interested in receiving text messages from the principal, please text the message @cmsprinc to (925) 304-6118.

NeSA Testing:
Chadron Middle School students will begin NeSA testing on March 26th.  It is very important that all of our students are in school during the testing window to ensure that we don’t have to pull them from their regular classes to make up the tests that they missed.  Thank you for your support.
Posted by Mr. Dressel at 12:37 PM No comments:

On March 2nd, 7th and 8th grade students from Miss Dobry's and Mrs. Waugh's 2nd period English classes celebrated Dr. Seuss' birthday by reading Dr. Seuss classics to students at the Child Development Center, Chadron Primary School, and Chadron Intermediate School.  This was a great opportunity for our middle school students to be positive role models for younger kids in the community and, most importantly, it was a lot fun!