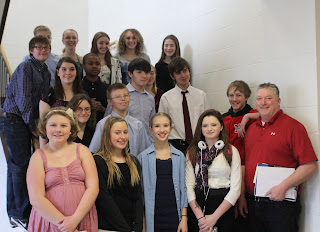 In this type of contest, players are judged on several criteria: Articulation, Balance/Blend, Dynamics, Interpretation/Style, Intonation, Literature, Note Accuracy, Phrasing, Posture, Rhythm, Technique, Tempo, and Tone Quality as well as Appearance, Behavior, and Stage Presence.
The judges use the following scale:
Chadron Middle School sent seventeen students to the competition.  Ten students received the rank Superior and seven students received the rank Excellent.  Congratulations to all of the students that participated and thank you to Mr. Rischling for preparing our students and taking them to Scottsbluff for the competition.
Posted by Mr. Dressel at 1:43 PM No comments: 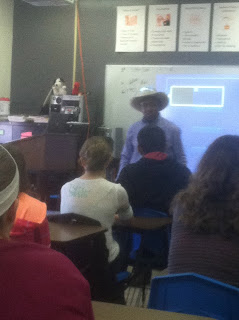 Mr. Sampson was the first African-American PRCA World Champion.  He told students his story about how he grew up in Los Angeles and that he found his motivation working in the stables outside of the city.  He explained that while many of his friends were getting into trouble, he managed to stay focused and learned a great deal of responsibility while working with and caring for the animals.  It was there that he sparked an interest in rodeo.

CMS would like to thank Mr. Sampson for taking time out of his busy schedule to speak to our 8th grade students and for taking an interest in our youth. 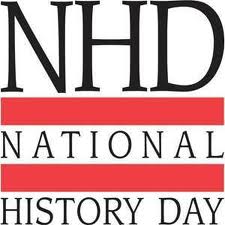 Congratulations to the following students for qualifying for the State National History Day competition:

Holly G. and Aubree N. - Intermittent Windshield Wipers: A Blink of an Eye

Good Luck to all of our Chadron Public School students that submitted projects and we will keep you updated on those who make it to the State NHD competition!